Fruit from the Lillypilly

I recently picked as many lilly pilly fruit as I could find on our hedge and boiled them up and strained them once soft through a strainer. Now to make a sauce. Any recipes tried and true would be appreciated.
at January 29, 2016 No comments: Links to this post

Hi over the last few days our dragon fruit have been flowering and what a beautiful sight they are.

The flowers are white, 30cm long and are open for only one night. The bud begins to puff out during the day and it is evident that it will open that evening. The photos below were taken below around 9pm using torch light. By that time they had reached their full beauty a sight to behold.

They have a translucency about them and almost seem to glow in the moon light. After one night of glory they start to close with the sun’s rays upon them, but not before the bee’s have had the most incredible feast. On cloudy days they stay open till about 10am. The fruit is then set and will grow rapidly. Some photo's of the beautiful rich red fruit in about 30 days to follow.

On doing some further research on the "Pitaya's" I find they are in fact regarded as a super food rich in antioxidants with, Vitamin C, Vitamin B, polyunsaturated fatty acids, protein, carotene, calcium, iron, phosphorous, " high in polyunsaturated fats (omega-3 and omega-6 fatty acids) that reduce triglycerides and lower the risk of cardiovascular disorders. Eating dragon fruit can help the body maintain such normal function as ridding the body of toxic heavy metals and improved eyesight. Lycopene, responsible for the red color in dragon fruit, has been shown to be linked with a lower prostate cancer risk."

The high amount of fiber in dragon fruit can ultimately help regulate diabetes, as it can stabilize blood sugar levels by suppressing sugar spikes. However, with any dietary changes or modifications, always consult your doctor to make sure this is a good food for you.

Eating a dragon fruit with its rich antioxidants can keep the skin tight and young. You can even make a face mask using the fruit combined with honey as a natural alternative to anti-aging masks." 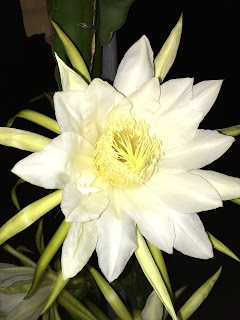 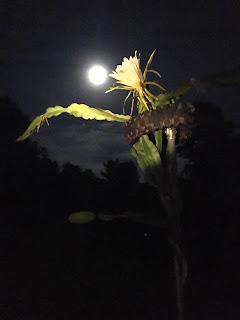 As we age so does our brain and we need to find a way to fight the effects. I am forever exercising my brain and endeavouring to strengthen my memory by learning new words, puzzles, naming every plant in the garden and eating various foods that I find help me such as sage, persimons, pomegranites and lots of salmon 3 or 4 days a week.

Traditionally fish has been described as “brain food” – a claim that was dismissed as an ‘old wives tale’ for many years but recent research into the links between fish and brain function suggest that this old wives’ tale may have more than a small grain of truth behind it.

We know that a large part of the brain is made up of omega-3 fats, making them vital for healthy brain function. In fact 60% of the fats in the brain are omega-3 with DHA, a type of omega-3 fat found in fish, being the main type. Omega-3 fats are essential for healthy brain development both in the womb and in early childhood. About 75% of brain cells are in place before birth and the other 25% are in place by the age of 1 year – making omega-3 fats an essential nutrient both for pregnant mothers and young children. Omega-3 fats were found to be so important for early brain development that they are now automatically added to baby milk formula and it is recommended that pregnant women eat two servings of fish every week – including at least one oil-rich fish."

Old wives' tales have long proclaimed sage's ability to boost the powers of memory. Now scientists have proved they were right.

Indeed, researchers are so impressed by the herb's powers that they are to investigate if it could be used to treat Alzheimer's disease.

The herb - Latin name Salvia lavandulaefolia - is thought to protect the 'chemical messengers' which carry information in the brain and are essential to memory.

Men and women have taken sage to fight memory loss for centuries, usually in teas or tinctures. As far back as 1597, herbalist John Gerard wrote that sage was 'singularly good for the head and brain and quickeneth the nerves and memory.'

Half a century later, Nicholas Culpeper, claimed the herb 'heals the memory, warming and quickening the senses'.

Researchers from the Medicinal Plant Research Centre (MPRC), based at the universities of Newcastle and Northumbria, recently completed the first clinical trials involving the use of sage by healthy adults.

They tested 44 healthy adults aged 18 to 37. Some were given capsules containing between 50mg and 150mg of sage oil while others received a 'dummy' capsule containing none.

The volunteers took part in a wordrecall tests at intervals between one and six hours later.

Those who had taken the sage oil performed better across the board - on average recalling eight per cent more words than those on the placebo, in some cases more than ten per cent.

Research team leader Nicola Tildesley said: 'This proves how valuable the work by the old herbalists is, and that they shouldn't just be ignored because they were writing centuries ago."

"Essential Oils For The Brain

Essential oils are an excellent way to treat mental fatigue and to boost your mental capacity. Here are three that can be a useful supplement to herbal remedies for times when you need to stimulate your brain.

Rosemary is a bright and sharp essence that improves clarity in the mind and emotions. Peppermint is stimulating It enlivens the mind and is one of the best oils to boost energy, creativity and learning.

Anyone have any special tips on improving memory love to hear from you.

http://plodresearch.angelfire.com/marriages.html Below are extracts from OPR’s purchased mostly from LDS who were additional e...

CHECK OUT MY WEB PAGES